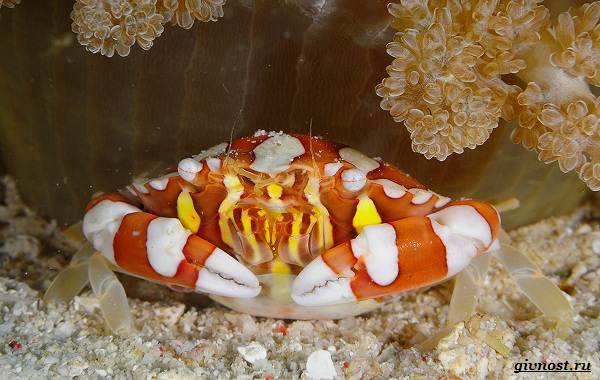 If you are one of those who love to look for small details during their dives and can spend time admiring the most colorful animals in the sea, you will be amazed by this little guy

One of the most curious encounters that we enjoy in some dives in Tenerife, is with this tiny crab. The Harlequin is a small crab that is difficult to observe when diving. It lives on rocky bottoms preferably in shady areas. It camouflages itself between polyps and rock crevices where it is very easy to go unnoticed. In fact, when it hides, only its shell is visible inside a tiny hole.

He is called Farmer Harlequin because of the spots all over his body, which resemble the jesters of ancient Italy as they wore various very striking figures on their costumes to amuse the king and his court.

This animal feeds on small crustaceans that are around it and usually prefers to hide inside anemones and corals. It is quite shy and prefers to go out at night to feed. Being an aquatic animal, it could not survive more than a few minutes outside of salt water. The size of the Harlequin crab does not exceed 4 centimeters, since it is the smallest crab in the world together with the Boxer crab.

The harlequin crab (Platypodiellapicta) is one of the species classified as vulnerable and its presence is decreasing in the Canary Islands due to the impact on its habitat and because some disrespectful people can capture it to liven up their aquariums.

These little crabs are very difficult to take in photos and it is preferable to try to find them late in the afternoon (which is when they begin to activate), without touching or disturbing them and with a lot of patience.