Turtles in the Canary Islands 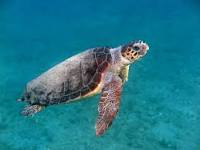 One of the most common species of turtles that we can find here in the Canary Islands is the Loggerhead turtle.They are seen by the temperate, tropical and subtropical waters of the world. For this reason, due to the warmth of the waters in Tenerife, it is very common to be able to dive in their company.

Next, we explain some curiosities about this turtle that will help you to respect and get to know this wonderful animal better: Its size, its mouth and how it orients itself in the sea.

We already know that underwater we see things bigger than they really are, but as far as these sea turtles are concerned, you can be sure that they are a good size. And it is that its size is one of the most impressive curiosities of the loggerhead turtle since they can weigh between 200 and 400 pounds (90 / 180 kg) and the largest measure up to 4 feet (about 1.2 meters).But it's the size of their heads that's why they've been given the nickname Loggerhead. In addition, they have a huge, hard, reddish-brown shell with a streamlined, flattened, oval shape, with somewhat serrated sides.

Loggerhead sea turtles are omnivorous and have extremely strong and powerful jaws to feed on. Its mouth crushes any crustaceans with tough shells, crabs, sea urchins and lobsters. This is not to say that they do not like to eat other marine animals such as jellyfish, some fish and even their favorite vegetables, algae.

We can find specimens of this turtle in practically all the planet's oceans, preferably warm or temperate waters, never in the icy waters near the poles.One of the most surprising abilities of loggerhead turtles is their ability to migrate, especially females who are going to be mothers. They can travel more than 12,000 km/7456 miles across the Pacific Ocean just to lay their eggs on the same beach where they hatched themselves.It has recently been discovered that turtles are sensitive to small variations in the Earth's magnetic field as they move through the sea and that they manage to go to the beach where they were born and that they will continue to do so as long as nothing or nobody modifies their magnetic field.

In 1993, the Ministry of Territorial Policy and the Environment financed the study on sea turtles in the Canary Islands, carried out by the Department of Biology of the University of Las Palmas de Gran Canaria. That same year, the Sea Turtle Conservation Program was launched, after detecting a considerable increase in the admission of these turtles to wildlife rehabilitation centers. The purpose of this program is to rehabilitate specimens that have some type of injury and reintegrate them into their habitat once they are able to survive on their own. However, its main objective is to protect sea turtles and their habitat. To achieve this, a project is being carried out that has financial support from the European Community since 1997, "Project to support the conservation of the loggerhead sea turtle (Caretta caretta) and the bottlenose dolphin (Tursiops truncatus) in the Canary Islands".

For more information, do not hesitate to consult these links:

Now that you know some curiosities about loggerhead turtles, when are you going to come see them?

We are waiting for you to take you diving or snorkeling with your family!