A sunken ship Condecito suffered a wreck in the 70s. Near the Las Galletas in the south of Tenerife. The ship took the ground 50 meters away from Punta Rasca with the sacks of concrete onboard. No one died. The accident became a prerequisite for building of the Punta Rasca lighthouse three years later.

Most of the deckhouse has been nearly destroyed; the wreck cracked having opened the boilerhouse and the engines to the sight of the curious divers. The remaining parts give an opportunity to get into the hull, feel this old tragedy, stroll around the cabins and the bilge of the ship. Flute fish, octopi, striped barracudas, fire caterpillars and other sea creature live both inside and around the wreck.

*Depth: 12-18 meters
*This is a suitable dive site for both beginners and experienced divers. 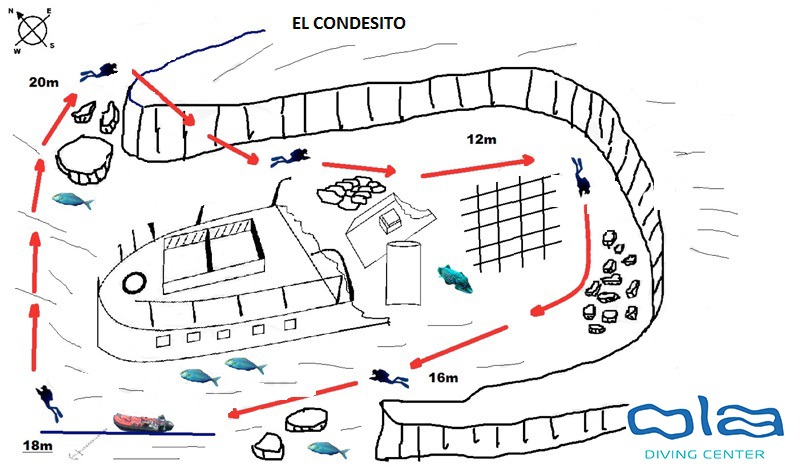 This dive site is situated in the north of Tenerife in a small town called Tabaiba, which is 40 minutes drive away from Las Americas tourist centre.
This wreck is a sunken tugboat El Peñon, which was working in Santa Cruz port for 49 years. In 2006 it was sunken on purpose to create an artificial reef and dive site.Today divers can swim into the engine room and other parts of the vessel.You can dive from the shore – the distance to the dive site is about 100 m.
Despite the fact that the vessel was sunken relatively recently, it attracted a lot of creatures: octopi, cuttlefish, barracudas, swarms of eels, nudibranchs and other sea animals.

*Depth: 15-35 meters
*This is a suitable dive site for experienced divers.

Two sunken ships just in front of Puerto Colon, just five minutes to reach this immersion point suitable for all levels. It is only accessible by boat.

The bottom is sandy, without rock formations or landmarks. In the middle of the sandbank, we find two sunken ships expressly to have a diving site. The wrecks are lying on the seabed about thirty meters next to each other. The descent is fast, the visibility excellent and the current none. The wrecks were completely emptied before they were sunk. Rays, snorers, octopuses are often found on this site. Fifty meters away, there is a strange statue lowered from the heights of Adeje.

*Depth: 18-22 meters
*This is a suitable dive site for both beginners and experienced divers 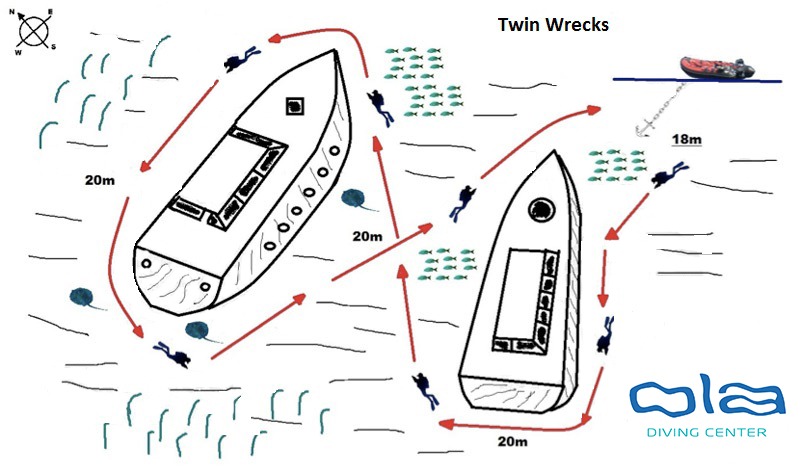 EL MERIDIAN is a wreck of an 18 meters German trawler which was brought to Tenerife in the 70’s. It is located on the south coast of Tenerife. It was intentionally sunk in 2005 to create an artificial reef. The area encourages exploring the underwater life of many marine animals, such as groupers, octopuses, moray eels, breams, even angelic sharks, which can be observed in the winter months.

A sunken ship El Meridian lies at the sand sea bed near the rocky reef. El Meridian used to be a minesweeping ship during the World War II and after the war was over became a fishing boat. In 1973 Wolfgang Mertis restored and renovated it, after which Meridian was taking tourists to sea trips. Today El Meridian is an artificial reef with abundant sea ecosystem. You can get there by boat; such trip will take no more than 20 minutes.

*Depth: 22-30 meters
*This is a suitable dive site for experienced divers. 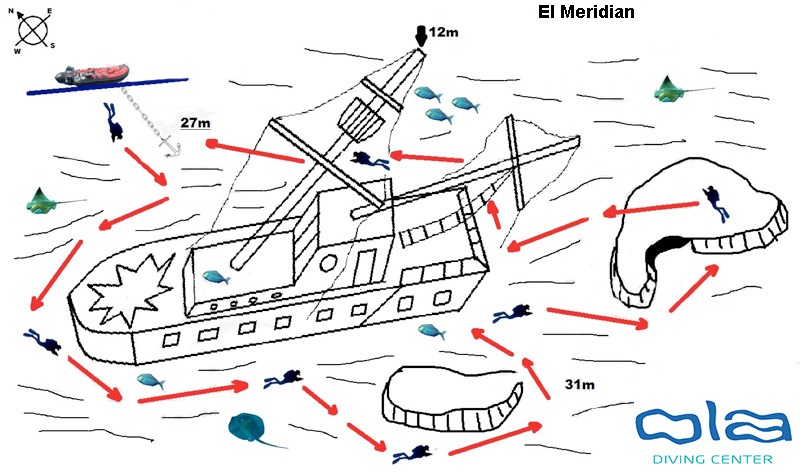